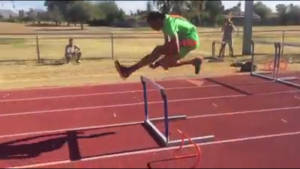 It’s three months Aries Merritt had his kidney transplant, months in which he went through many cycles of immunosopressives to avoid the organ’s reject.

He said he would recover the surgery as soon as possible in order to try entering the roster for Rio 2016, and yesterday he finally started hurdling again. After the training session he posted a video on his Facebook page to let his fans know he is coming back.

The recovery seems going very well and we are really happy Merritt is again on the track, also because we know what means for an athlete not being able to properly workout!