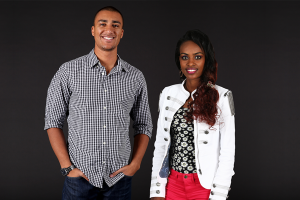 As every year, IAAF voted fot the male and female athlete of the year; this year Usain Bolt, Ashton Eaton, Christian Taylor, Genzebe Dibaba, Dafne Schippers and Anita Wlodarczy competed for the title.

Unlike last year, none athlete decided to refuse the prize because of the presence of doped athletes on the list, even though the ceremony took place during a private dinner because the scandals which involved the World Federation ex President, Lamine Diack.

The decathlete Ashton Eaton and the middle-distance runner Genzebe Dibaba secured the victory: during this 2015 both of them won the world title and they stated the new WR, Eaton on decathlon and Dibaba on 1500m event.

Eaton is the first decathlete who carried off the title of Best Athlete of the year and he declared to feel honoured for the prize achieved since it is a recognition of the job done, even if he does not think to be better than Bolt and Taylor and he is glad to be part of the trio.

Instead, Dibaba reached the final last year but she did succeed in the end; it was a very intense year for her who received the first world championship golden medal and, now, the first title of Best Athlete of the year.