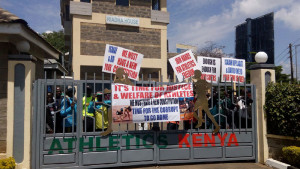 In Nairobi a group of athletes composed by some fifty people has been occupying the Headquarters of the Kenyan Federation since Monday morning because of the allegations for subtraction of funds received by Nike to finance sport groups and athletes, done by the PResident Isaiah Kiplagat and David Okeyo, high officer of IAAF and AK Vice President.

The occupation started Monday morning at 7.30, when the protesters asked the staff to leave officed and then they barricaded inside, captained by the Secreterary Julius Ndegwa; cartels and banners have been hanged, all asking for the President Isaiah Kiplagat’s and the high officiers’ dimissions.

Aside from the Nike scandal, the occupiers, among who there are also Rose Tata Muya, 400 Hs African Record holder and Justina Jepchirchir, owner of the 3000m’s one, are also protesting against the diffuse use of doping in the country and the bribes scandal which apparently does not involve only the Russian Federation. To this regard, IAAF asked AK to explain and rectify the antidoping controls, otherwise the federation will end up in the same list of those risking disqualification.

Kiplagat comments the situation stating that protestants acted so that an important meeting regarded the most controversial topics had to be cancelled and he goes further saying that “The strong athletes are all traning, they don’t have time for manifestations”.