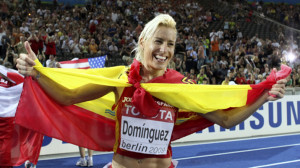 After 9 years the sentence for doping reached the Spanish Marta Dominguez, World Champion in the 3000 hurdles at Berlin 2009 and European Champion in the 5000m at Munich 2002 and Goteborg 2006.

Her name had appeared in the two great anti-doping operations led by the Spanish police: Operacion Puerto (2006) and Operacion Galgo (2010) but she was able to go through both of them uncondemned.

It is interesting to note that, in 2010, during the second operation in which there were many evidences against her, she was vice president of the Spanish Federation.

In 2013 IAAF informed RFEA (the Spanish Federation) of the anomalies in the middle distance runner’s biological passport and asked for explanations which, once given, were not sufficient to dispel the doubts regarding her positivity, thus 4 years of disqualification were temporarily assigned to her along with the possibility to ask for a hearing.

In February 2014, RFEA discharges her and removes her disqualification. Few months later, IAAF and WADA ask for an appeal to CAS which condemns the athlete to 3 years of ban starting from the 24th of June 2014 and to the revocation of the Berlin 2009 World Championships title and the Barcelona 2010 European Championships silver medal, both of them won in the 3000 hurdles.

Now, rankings will have to be rewritten and guess who will take the World gold medal? Julija Zaripova, the Russian athlete investigated for doping who now risks to lose many titles starting from 2010.

Dominguez dropped her career as an athlte a few years ago and she is currently dedicating herself to politics, being Senator of the Popular Party. She should have candidated herself to the next elections but she retired for “personal motivations”. By a twist of fate, the athlete had been chosen to present the new anti-doping law during the Senate meeting.