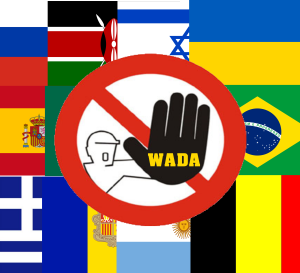 WADA rode the wave of the Russian scandal and, after having examined a bunch of data, the World antidoping agency emitted a first verdict not only for one indicted, but for a number of nations.

To start with, as it was obvious, there is the antidoping Russian agency (RUSADA) has been suspended with immediate effect because considered to be not adequate, compliant and disrespectful towards WADA’s laws. This was an easy guess!

Careful, though: the Russian agency is not the only one to be inadequate.

From WADA offices, Argentina, Andorra, Israel, Bolivia and Ukraine have been branded as “not compliant” as well.

The named states, not suspended as Russia yet, have time until the 18th of March to regularize themselves. The Wada spokeperson, Ben Nichols, explained that: “Andorra and Israel have been declared not compliant after that it was declared they did not have sufficient antidoping rules. Argentina, Bolivia and Ukraine have been declared not compliant because of the usage of not accredited labs for the urinal tests and the blood samples, an element forbidden by the antidoping World regulations.

There are also countries which have been inserted into a “watch list”, that is Brasil, Belgium, France, Greece, Mexico and Spain, which also have time until the 18th of March 2016 to succeed in applying and making the relative antidoping agencies effective; otherwise, they will be named “not adequate” as well.

And Kenya? The illustrious African Country has been given some time to either explain and rectify the antidoping controls or join the countries in the “watch list”.

“The message is clear: there will now be a greater attention to strengthen ourselves, so that all the world antidoping organizations can provide, independently,  solid antidoping programmes”, Sir Craig Reedie, WADA president, said.

“Our priority now is to grant that all our partners become fully compliant and that their systems get to be error-proof, in order to protect clean athletes and reassure the sport supporters.

Sport reflectors is under a spotlight, now more than ever, and WADA started the necessary work for Russia’s recovery. The world is looking and we acted. We will lead all the necessary meetins with authorities to solve the “non-compliancy” status of RUSADA.”