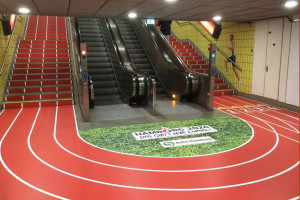 Track&Field world seems to infect more and more designers all over the world such as the ones who installed false tracks in public places; do you remember about Tokyo’s airport?

Now is the turn of Hamburg’s underground to be made into an athletics track, also with a view to 2024 Olympic Games for which it is a candidate. The German ministry Micheal Neumann, the underground CEO Kay Uwe Arnecke and the ex star of athletics Ingo Schultz, presented the new underground station of Jungfernstieg some days ago.

“I hope the citizens have an even stronger desire to use public transport in Hamburg – Neumann said – We want to motivate people to move more and to do some sport“.

Hamburg is one of the five candidated along with Rome, Budapest, Los Angeles and Paris; the decision will be taken during the Lima Congress in 2017. The German city has never hosted the Olympic Games and it beated Berlin in the national internal race; all the events will take place within the city so that all the athletes can get on foot to the places where the competitions will be.

It looks like a good initiative, at least athletes will be motivated to use the stairs and to do a bit of running.