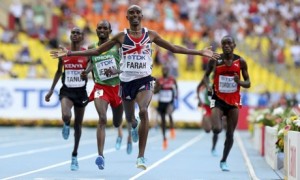 The Olympic year carries many athlete’s renounce to high-level competitions in order to better prepare for the most important competition in every athlete’s life.

The first one who gave up partecipating into the Indoor World Championships is Mo Farah; the British athlete who trains in Portland, Oregon, the city in which the competition will take place, will only attend the Glasgow Indoor Gran Prix in February to later concentrate exclusively on keeping the Olympic title.

“2016 will be another great year for me, the Glasgow Indoor Grand Prix will be fundamental – he stated – most likely, Glasgow’s 3.000 m will be my only indoor race and I want to do it very well. They will provide a good feedback on how my trainings are going and they will help me preparing a great outdoor season”.

In Rio, Farah will try to defend his 5000m and 10000m titles after a seasons which saw him among the protagonists of the doping scandal regarding his athlete Alberto Salazar, a scandal which ended up for the best for the British athlete who will be able to keep trainings with the Oregon Project trainer.