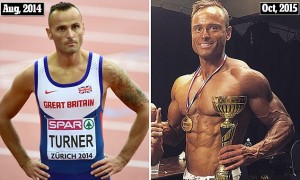 Born in 1980’s, PB of 13”22 on 11o Hs, European champion in 2010 and World bronze in 2011. The British Andy Turner, after his retirement from tracks in 2014, at a glance decided to follow the prints of his brother Gary, starting his personal transformation in body builder.

In two years, Turner changed his slight body with a permanently tanned muscular one, succeeding in winning the competition Pro Fitness Model in Miami in the event over 35.

Now Turner is running fitness classes to help other people on the body building track.

In Great Britain some did not take this retirement from tracks for body building in good part, but it seems Turner will be forgiven since he proudly defended the Union Jack during all his long hurdler career.

Turner shot five videos for the whole duration of his way towards Miami competition, here is the fifth and last video of the series.