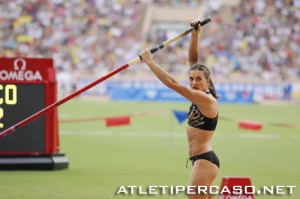 33 years and a stellar career where she won everything and updated 28 times (indoor and outdoor summer) the polevault WR (as the ‘maestro’ Bubka did) bringing it to 5,06.

After a break taken to be a careful mother to her daughter Eva, Yelena Isimbayeva seems to be ready to challenge the world during the Olympic showdown in Rio.

The polevault tsarina thought about retirement after these Olympic Games, but with the golden medal on her neck, which would be the third after Athens 2004 and Beijing 2008; the triple did not arrive in London where she arrived “only” third with 4.70.

And there she is, in her Volgograd, where everything began, releasing interviews and shooting videos on her technical trainings. The video we propose to you shows the zar who, with only ten run-up steps elegantly jumps 4,50 displaying to have achieved a great condition after birth.

Where will the future bring her? Surely higher than 4,50 and we hope even further, good luck Yelena!


ISINBAYEVA: THE RUSSIAN QUEEN ON HER WAY BACKISINBAYEVA: THE RUSSIAN QUEEN ON HER WAY BACKThis August, in the Beijing World Championships, a major absence was noticed: the one of the pole vaulter which has broken for multiple times the World Record since the times it stood at 4.82 meters.Although she wasn’t there (the place where she had become Olympic Champion for the second time 7 years before), something of greater importance was being prepared in her training venue, back in Russia. In the video you can see Yelena going past 4.50 meters with 10 steps only, which is a good indicator of her physical preparation after having become a mother barely one year before.With the aim set already in February, the Portland Indoor World Championships are a possibility. And she doesn’t contain from saying that, on her road to or even in the Rio Olympic Games, she wishes to feel the sensation of breaking the World Record again.As she puts it, “after experiencing that feeling several times in the past, you want to do it again.”