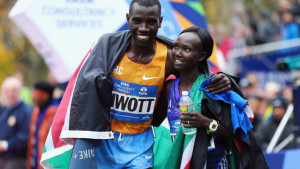 The first Sunday of November represents a unique day for a running lover: the day of the Marathon of New York, the world most famous 42,195km race which gathers, into the Big Apple, runners from every corner of the Earth. Every there is someone who runs it personally and who watches it from home, but the fact stays that this sport and media event is enormous.

The first edition of the competition dates back to 1970 and it involved less than 200 athletes, among whom only one woman. The New York City Marathon was run 45 times, which means every year apart from 2012, when the hurricane Sandy prevented the starting of the race.

As of tradition, this year as well many prestigious athletes were on the starting line at the “Verrazano Narrow Bridge”, through the city to then arrive to Central Park, arrival sport and end of the fatigue for the 50thousands runners which filled New York’s streets.

The female race saw, in the first part, an unusual going of the race: until the 30th km, in fact, the European athletes led the leading group; ahead of everyone, the European champion Daunay and the Portuguese Moreira. The attack led by the 2014 winner Mary Keitany was decisive: the Ethiopian, after having taken considerable ground against her opponents, went straight away to the arrival in Central Park, ending her effort in 2h24’25”, with more than a minute gap on the second classified, Aslefech Mergia (2h25’32”), while the last spot on the podium was taken by Tigist Tufa in 2h25’50”. The fourth, and first among the non-Africans was Sara Moreira, just 3” away from the podium (2h25’53” for her).

Half an hour after women it came men’s turn, who left at a quite slow pace for marahton’s high standards: to locse the first five kilometers, in fact, it took 15’47” to the first ones, running at a 3’10”/km rythm. After a 1h06’20” time at the half marathon, the race flourished with Geoffrey Kamworor’s decisive attack, capable of leaving the favourite Wilson Kipsang behind: the only ones who left aside Kamworor in the last kilometers were Stanley Biwott and Lelisa Desisa, the three of them racing for the vicory and the 100thousands dollars prize.

Biwott’s attack decided the race, immediately putting Desisa out of the games and forcing Kamworor to try to replicate, without success:Biwott, in fact, meter after meter, managed to distanciate himself from the last opponent as well, grabbing the first place after a 2h10’34” race. Second place for Kamworor (2h10’48”) and third for Desisa, who closed his marathon in 2h12’10”. Fourth place for Wilson Kipsang.