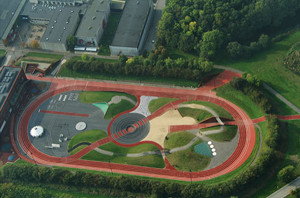 For all ”track&field” lovers, the most beatiful track is a sort of temple, the place where you train with fatigue and you race: someone on the tartan, someone on the throwing dais, all the athletes sooner or later pass through it. A lot of stories, in these times, talk about abandoned athletics fields, either for lack of money or because they are not suitable for large groups. Clearly, a structure’s functional and aesthetic validity are a plus motivation to train better, especially for a practical but also psychological reason.

It is a recent news the one regarding the International Olympic Committee which, along with the Association for sport and spare time, assigned the title of “Best structure for the world open air sport” to the University of Southern Denmark athletics track”: the Danish is, thus, the best sport infrastructure for athletics in the whole planet.

For this occasion,a prize has been assigned to the University and to the architects Maria Keinicke and Flemming Overgaard Keingart, capable of collaborating to realize a masterpiece for what regards either functionality and aesthetics. A masterpiece, the one made by the Danish University, which was able to “defeat” 124 more projects battling for the title: among these there were even some builings made for the Winter Olympic Games in Sochi in 2014 and the next Rio de Janeiro Olympic Games.

“An attracting environment which stimulates senses“, this is how the complex built in Odense, the third biggest city in Denmark with his 191 thousands inhabitants and the city where Hans Christian Andersen was born, has been defined by jury.

As you can see from the picture, the interior of the track is full of tools, alternative tracks and drops which allows athletes to do the most various trainings without having to go out from the track. Furthermore, tartan continues outside track as well for who needs a longer track. Throws have a dedicated field next to the track, except for the shot put which doesn’t need much space and is included in the “Athletic Exploratorium“.

Architects are very proud of the award: “We spent the past eight years looking for creating ideal scenarios for sport and the whole athletics. We are proud of having contributed to create the bases for the Danish sport architecture, which is among the best in world.

“The prize which has been awarded to us is a strong proof of what we are able to do in Denmark in this sector” Esben Danielsen said, the new director of the Engineering Foundation, who develops and sustains the building of infrastructures for sport; to speak the truth this is exactly how it looks: Odense’s track is a fairy tale for every “track&field” lover!