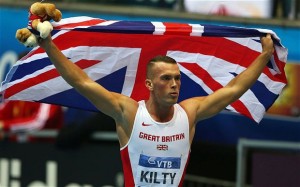 When the outdoor season ended in the middle of September last year, the World and European champion of 60 metres, Richard Kilty, received a nasty blow. Indeed, the British runner’s trainer, Rana Reider, has dropped out of his coach role for Kilty and for the 400metres-runner Rabah Yousif,  finalist in Beijing.

Richard Kilty, who has always acted as a valid sport athlete in the important moments, said to be quite worried for having to prepare the Olympic event without a guide.

From recent interviews, the Britishman stated that, according to him, at the moment UK has not any trainer, federals or not, who are able to satisfy an élite runner’s programme.

Apart from the results of the races themselves, Kilty said he is more worried about his muscles’ health since he already had several problems this year and only training coming from an expert trainer can avoid further problems.

After having asked British Athletics for a solution for a long time, it looks like Kilty is taking into consideration the option of leaving Great Britain to go abroad to look for a trainer capable of carrying on and plan high-level trainings.

It is more and more common for famous athletes to look for answers outside their country.

What do you think about that? Should federations invest more to get high level trainers or is looking for coaches abroad (in some cases, of course) the only solution?