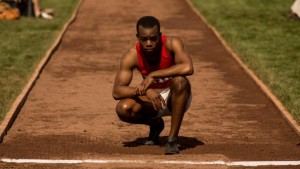 After stories such as Roger Bannister’s one, ”Chariots of fire” and the most recent “Unbroken”, the great and passional Athletics comes back into the cinema with one of the most intense and ardent life as the ephimeral spirk of a candel: Jesse Owens.

The ebony bolt will be played by the Canadian actor Stephan James, who did his best to identify with his idol, also trying to imitate the efficient pace that Owens showed to the world.

The title of the movie will be simple and undeniable; “Race“. A race, like Owens’ whole life, spent in the shadow of racial segregations, in the atmosphere of the nazi Olympic Games when he silenced Hitler and in the unexpected ingratitude of his country when he came back home.

Jesse Owens will be always remembered as the one who, without using weapons, succeeded in defeating Hilter’s iced and metalic gaze, showing to the world the fragility of the twisted nazi utopia, knocked out by a proud Afro-American from Alabama.

The film is expected for February 2016 in the American cinemas, but meanwhile, watch the trailer. Enjoy!