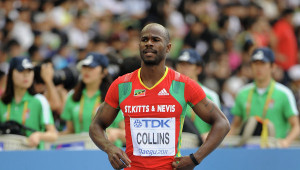 Sprint is a treachous lover: it makes you floating on air when you are young, making you feel invicible for the powerful, controlled and irreprensible races which are always paid back by a awesome time. After some years, almost around thirty, a runner is usually labelled as “old”, his mind runs faster than his feet.

Who does not agree with that is the St. Kitts&Nevis’s banner, Kim Collins, who is ready to belie all of this.

After a new extraordinary year, Collins is about to enter in the Olympic year along with his 40 winters and with a new motivation leading his career.

These two relevant times also were the world records in M35 event, relieving the British Linford Christie of the title.

Collins’s new aim, for the 2016 season, is: to stay undefeated in the National Championships (9″98 this year) and to be the first person running below 10 seconds on 100m at 40 years old.

During an interview for the London website Trackfield97.com, Collins stated he had lived these years in a great calm, feeling loved by his fans and his colleagues, never denying a photo or an autograph to everyone who asked for it. All that helped him to carry on his path, maybe loving the athletic now more than when he was young.

“I love what I do and I receive rewards, thus if I could keep running up to 40 years old, or maybe until 45, I would do it, since it is what I love. We cannot let the others to decide the age when we become old for the athletics or for whatever sport else.

If I can compete at these levels until 45 years old, I will keep running. Likely, I should already drop this year, but if my body continues to work and to run fast, why should I give up?

“I don’t want stop doing what I love.”

After the sad vicissitudes with the Nevisian Federation, in occasion of London 2012, it seems there is a new eminent opportunity to dress again the national colours in Rio 2016 for the “granpa” Kim, even if it does not seem to be so important for the runner who said he is aming to settle the time below 10 seconds at least once in this season, becoming a sport longevity legend and, why not, aspiring to go over, succeeding in emulating Marlene Ottey’s glories who hang up her shoes at 51 years old after having run 100m in 11″77.

We are sure Kim Collins will be able to give himself an amazing present for his 40 years, but, beside all the results, Collins will be the example that the love for your own sport could lead you to challenge your body and will-power always looking for new peaks to climb.