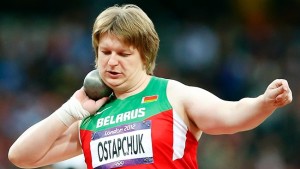 When an athlete is tested positive, if he won a medal, he gets it seized and the medal is given to the next athlete; but in this way the athlete gaining the deserved medal cannot celebrate and attend to the prize-giving ceremony, the more pleasant moment in an event.

The WADA President, Craig Reedie, thought to arrange a prize-giving ceremony after the Olympic games in Rio for all the athletes who have been deprived of the medal during the Olympic Games because of a doped athlete.

“We are making sure that, in the moment of the reassignment of the medals, these are correctly awarded“, Reedie said since he wants each athlete to have his “moment of glory”.

Finally, the athletes will be able to step up to the podium and see the flag of their country wave along with their anthem in background, even though it will not certainly be the same emotion they can feel in the moment of the race.

In the photo: Nadzeya Ostapchuk, tested positive at the Olympic Games in London (Matt Slocum).