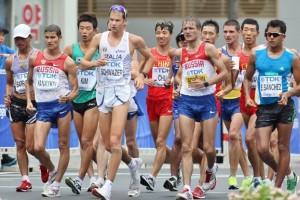 The news about the result achieved by the Italian athlete Alex Schwarzer during the test on 20 km race walking planned for today at 16:00 in Rome, more exactly in Parco delle Valli (an area where a 1.343 meters track has been derived), is still pretty hot.

After the test on the last 24th of September, when the race walker competed on the 10.000 meters track in Tagliacozzo, at the present, the distance almost doubled and the result is more than good, in terms of time.

In fact, Schwarzer, after having run the first 5km in 19’25” and the 10km in 39’00”, ended the test in 1h18’57”; such time, with the presence of the judges and on an homologated track, would be the 6th annual world performance as well as his third best time ever.

With this performance, the first part of Alex Schwarzer’s preparation, is over; the second one will follow around half October and it will help the athlete to achieve the body fitness needed for the return to the races after the expiration of the disqualification, i.e. the 29th of April 2016. The Italian athlete had also applied for a reduction of the disqualification, but the National Tribunal for Antidoping declined his request because of the missing approvations by WADA and IAAF.