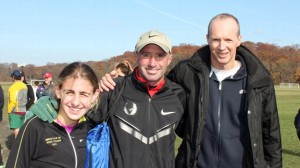 After having struggled for long time whether to leave Alberto Salazar’s training group or not, Mary Cain eventually decided to keep being part of the prestigious Nike Oregon Project, a training group Mo Farah and Galen Rupp are also part of, despite remaining far from Portland, Oregon.

Cain, who is still very young (’96 class) has taken this decision after the disappointing results of the last season. In 2015, in fact, Cain had, on average, the worst results of her career, ending up eighth in the 1500m National Championships, a race in which she had already won two outdoor silvers (2013-2014) and an indoor gold in 2014.

The young runner will keep training in Bronxville, New York, her home. Although following Salazar’s programmes, John Henwood will be the one in charge of monitoring Cain’s trainings.

Cain comes back on her original path after having done, maybe too soon, the leap to professional athletics; in her blog she gave the first impressions of this “homecoming”, explaining how calmness and familiar serenity will be greatly helpful for such an important upcoming year.