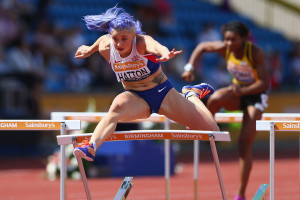 Each athlete, at every level, dreams to compete at the Olympics. The young british Lucy Hatton, silver medal on 60hs at European Indoor Championships in Prague this year, is not sure to succeed in realizing her dream although she has already set the entry standard for Rio.

Due to an injury she has not been included in the UK Athletics funding program and is looking for a way to support her athlete career till Rio Olympics. She launched a crowdfunding campaign with face-to-face meetings as rewards for the ones who donates; at the moment she reached, and overcame, the campaign target, 1.000£.

Hatton in Prague’s European Indoor Championships set the new National U23 Record in 7″90 and during the outdoor season run faster than the olympic entry standard; unfortunately a foot injury made her miss Beijing World Championships and prevented her to have a good season. To be part of the Federation funding program is necessary to reach some targets she did not accomplished.

“Coming into an Olympic year, I can imagine there are a lot of responsibilities on that programme, and with such a massive change I don’t know if that would be the right thing for me.“, states Hatton.

So now we have to wait the official olympic team to see if crowdfunding was the right choice!