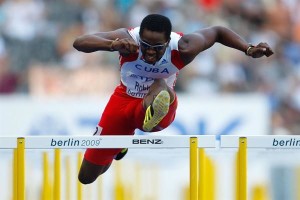 In 2013 Cuba lost one of the best hurdlers of all times, olympic champion in 2008 and former world record holder on 110hs, Dayron Robles.

After some conflicts with Cuban Federation due to the lack of attention in him, the athlete stated he could avoid the injury during London 2012’s olympics, Robles decided to retire. Few months later, although, media reported the cuban asked to compete for a Monaco club, right followed by Cuba’s forbid to compete for abroad countries.

Today seems Robles has changed his mind and wants to return competing for the Cuban national team; the federation would be happy to give him a seat on the plane headed to Rio if he demonstrates being again the athletes of some years ago.

Robles now is in the island, training at PanAmerican Stadium waiting to be assigned to a coach; the hurdler has only to demonstrate to the federation what is capable of and come back on track struggling for an Olympic medal.