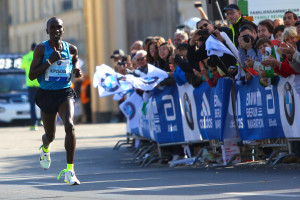 By now, the prestigious Marathon of Berlin is fertile soil for those aiming to the lists of world record holders, and the 2015 edition was not less than it, above all in the male category, where the peak name was the one of the Kenyan athlete, Eliud Kipchoge.

Thanks to the help of his supporters as well as of his direct competitors for the victory, Emmanuel Mutai e Geoffrey Mutai, Kipchoge has soon started to look for the rhythm for an all-time race, running the half Marathon in 1h01’30, even 15 seconds less than Dennis Kimetto in his WR day.

But towards the 32nd km, Kipchoge realised that his rhythm was decreasing and delay time was over: he had to speed up and to attack the stopwatch in that moment.

Unfortunatelly for Kipchoge, a considerable technical aspect occurred against him: the insole of the shoes, probably because of the movement of the foot, slowly moved from the shoe, almost totally, forcing the Kenyan athlete to run with the unpleasant sensation.

Despite the insoles, Kipchoge stoically kept going, but the gap between him and the record holder Kimetto started to expand each kilometer more and more up to the finish line; there the Berlin Marathon ended confering the victory to the Kenyan, who won in 2h04′ sharp.

Eliud Kipchoge declared he was satisfied for the time but absolutely disappointed for his unluck with the insoles a problem which him from being projected in the important zones of 2h03′.

Among women as well, it is Kenya which rules in the German capital, thanks to Gladys Cherono’s great performance.

The Kenyan athlete had his fair challenge to win, especially after the duel engaged at the 18th km with the Etiopian Aberu Kebede.

Starting from the 35th Km, though, Kebed slowly started losing Cherono’s pace, who arrived with 48 seconds of advantage on the chaser at 2 kilometers from the arrival line; such advantage allowed her to run the remaining 2km and 195m only caring about the final time.

Cherono looked for a performance below 2h20′ and her research was not in vain: 2h18’12”, 11st world time ever on the that distance and great satisfaction for all Kenya, which keeps ruling the historical and legendary Filippidus’ race.