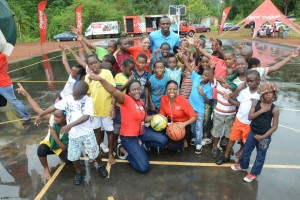 IAAF created a social responsibility programme named, “Athletics for a Better World” with the aim of using athletics as a mean of social change. Associations which take part of it will be able to utilize marketing actions and IAAF’s world reputation in order to carry on their projects.

12 athletes joined for this project, with the latter of them being Usain Bolt with his Usain Bolt Foundation.
The sprinter’s foundation wants to create opportunities, through education and cultural development, to promote a positive change. Many actions have already been carried out by Bolt; for the second year in a row he supported Samsung Cup, a football competition in which Jamaican primary schools take part; furthermore, he donated one million and a half dollars to his ex-school and provided pupils with sport equipment.

“I am very proud that Usain Bolt Foundation is officialy a IAAF partner– Bolt states – Since the association has been created, I, along with staff and volunteers, have worked hard to inspire children to become what they dream to be. Thus, to have this acknowledgement by IAAF is a reward for all the work done and also a great opportunity for us to expand the foundation and inspire more kids around the world“.

President Sebastian Coe tells himself enthusiast about this new collaboration which will be able to change the life of hundreds of people. “I know what a positive impact it can have on athletics and what a role model Usain Bolt is for millions of people in the whole world. The combination of these two elements is a great strenght and working together we will be able to make the difference”.