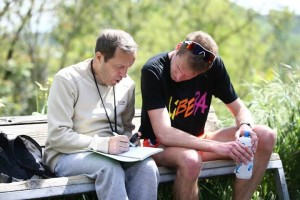 Yesterday, in fact, after having received the ok from Coni to enter the non-homologated track in Tagliacozzo (AQ), Beijing 2008 Olympic champion had a try on 10 km racewalk in programme as preparation test.

The test had some unexpected outcomes from the very beginning. The Italian, in fact, started to run laps over laps at a very fast pace. After the first km racewalked in 3’39”, the pace settled down at about 3’45” to eventually drop slightly in the ending. The final result left everyone startled: 25 laps ran in 38’02″52, an improvement of 48 seconds on the PB achieved in 2011.

But it is not over! If it was a race, this performance would place at the third place all-time, only 9 seconds far from the World Record established in 2008 by the Spaniard Francisco Javier Fernàndez.

Let’s remember that Alex Schwazer is serving a 3 years and 9 months disqualification for having being tested positive to EPO just before London’s Olympic Games. After a first period in which he seemed to have decuded to definitely drop athletics, the racewalker decided to try it again. Since some months he is under the lead, and the control, of Sandro Donati, Mario De Benedictis and Alessando Pezzatini, who are constantly monitoring his biologic parameters in order to certify his cleanliness when he will return to competitions, in view of Rio Olympic Games.

But, in order to compete, it is necessary the approval of the discount request on the Italian’s disqualification.  The 5th of October he will show up in front of TNA who will evaluate his answer,  already refused by CONI .