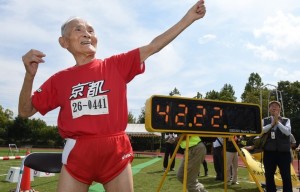 105 years and still so much will to test oneself. An old Japanese does not fear the 100m straight line and he pushed hard to rewrite the page of the World Records dedicated to the master athletes.

Hidekichi Miyazaki ends his race in sligtly more than 42 seconds becoming the fastest centenarian of the World, a record for which he already deserved the nickname of Golden Bolt.

In Kyoto he ran in 42”22 stating to be not satisfied because missed his goal of running in 35 seconds. But the most surprising thing is that Mr.Miyazaki assured: “I can still run 2-3 years more”.

Besides, he had already surprised us last year with a “fast” sub-30 seconds at 103yo. (WATCH THE VIDEO)

Well, the spirit is the right one we can just send him compliments for his incredible guinness runs.