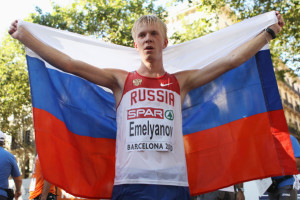 In the last few hours, it has been revealed how Russia will maybe manage to go past the sneak off from the latest doping scandal that hit the Racewalk team.

In July, some controls carried out on the Saransk’s training field, showed that six racewalkers were positive to the Erythopoietin (Epo),  a substance, alas, even too much well-known.

After the practical consequences conducted by WADA and RUSADA (the world and the Russian anti doping agency, respectively), one of the involved athlete, Stanislav Emelyanov (great champion in the young class), asked for the “re-analysis” using the sample “B”. Tests on the second sample although resulted negative according to Russian media (but the IAAF refused to comment the news).

Let us remember that, apart from this recent episode, Emelyanov had already been incriminated by IAAF because of some irregularities detected on his biological passport and he was deprived of his European title achieved in 2010.

This event instilled hope in the other racewalkers who, unlike Emelyanov, had not asked for the double check.

The first of them who spoke up was Denis Strelkov, specifically asking for the control of his “sample B”, even if, techincally, it could not be possible: the athletes have a limited span of time in order to ask for the re-test and Emelyanov was the only one, among the Russian athletes, who respected the deadline.

During an interview to the Russian press, Strelkov stated he does not have any economical support in order to face a re-test process, but since now Emelyanov has been acquitted, the other racewalkers can fight for their owns rights.

We will wait for the end of this umpteenth event but it is a fact that there is something blurred in the the remaining racewalkers’ story: if you are sure about your own innocence, why do not you ask for a re-test as soon as possible or, at least, for some help from your own Federation?