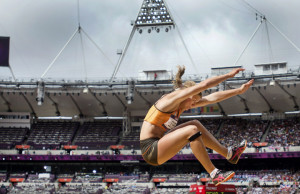 She arrived within a hair’s breadth to the title for 100m as well, conquering the world silver medal and even setting up the national record (10″81) behind the almost unbeatable Shelly Ann Fraser-Pryce: we are talking about Dafne Schippers, the Dutch runner who surprised everyone during this season, thanks to the improvement that allowed her to reach the world vertex for the specialty.

Although, Schippers does not look like she wants to stop: during these days, the ex heptathlete stated there is a concrete possibility she will compete in the long jump as high level athlete; in this specialty she holds the national record (6,78m) that she did when she was trying out with the multiple competition. “I want to do something different from the sprint” – the 25 years old athlete stated who believes she can surpass the “7 meters wall”, a result that will bring her to the top of the world ranking.

After all, the long jump is not a news for Schippers who has been practicing it for years since it is a specialty included in Heptathlon and who is keeping practice even now that she is focused on velocity; “I train for the long jump every two weeks“, the new world champion just said, despite later specifying she wants to do it “just for fun”.

In fact, in the past time Schippers had some problems with her knee  because of the high jump and she stated that for Rio 2016 she will just train on the velocity and for the relay race; hence, at the Olympic Games we will not see her compete on the approach but, who knows, the Dutch athlete has already surprised with diggy performances that can leave some open doors for the future decisions.