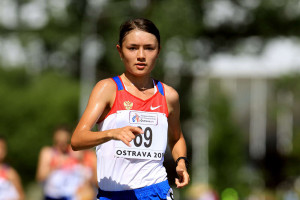 It’s time to talk again about russian doping, but maybe we never stopped because of all the recent news.

Let’s go back in time for a while. Two years ago the russian racewalker Mineyeva, winner of the European U23 title on the 20km race in Ostrava 2011, has been banned for doping losing the title and allowing the italian Antonella Palmisano to jump on the podium.

Now, two years later (Mineyeva is already able to compete again), the silver that became gold in 2011, has been caught cheating too. We are talking about another russina, Nina Okhotnikova.

For the second time, the race ranking changed due to doping. The new European U23 Champion, after 4 years, is the spanish Julia Takacs. Second Antonella Palmisano, followed by her teammate Eleonora Giorgi, actually the 5th to cross the finish line.

We have no words about russian doping, getting more and more ridiculous. We have no words and no trust, this has to be stopped. Let’s hope the new IAAF President Sebastian Coe will clean this mess.