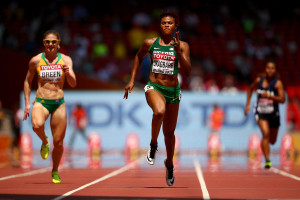 Blessing Okagbare, leading athlete of the Nigerian team and holder of the African record on 100 meters (10″79), might not take part in the Olympic Games next year, because of a decision of the Federation.

This year, at Beijing World Championships, the Nigerian athlete made it to the final in 100 meters, but she concluded in the eighth position, only to later give up 200 because of an injury.

As if often happens when a top athlete seems not to be in the right race conditions, some small suspects have been raised since that injury by the Nigerian federation and media; such suspects dissolved completely when Blessing Okagbare crossed the arrival line in the second position in Zurich Meeting with the excellent time of 10”98, just behind Shelly Ann Fraser-Price (10”93). It was a great joy for the Nigerian team, which apparently recovered a top athlete just a few days before the Continental championships.

But something happened, which upset her bosses. The Nigerian athlete, in fact, once she recovered her best shape, decided to end her season and, consequentially, not to partecipate to the 11th edition of the African Games in Congo, in order to prepare for the upcoming 2016.

The decision was not well met by the Nigerian federation and by the National Sports Commission (NSC) which decided to forbid Blessing Okagbare to represent the Nigerian team in the Olympic Games of Rio 2016, because of anti-patriotic behavior. Although this, Okabare still has some time to change her mind and decide to compete.