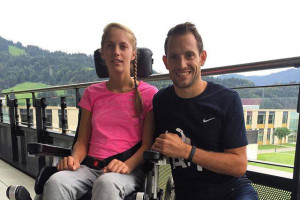 On the 4th of September, the advertised event of pole vault took place in Salzburg; it was organised in order to raise funds for Kira Grünberg, the unlucky Austian pole vaulter victim of an accident during a training that caused the paralysis of her body.

The winner was the awaited Renaud Lavillenie who, after the disappointment at the World Championships in Beijing where he managed just to grab the third place, conquered the first place with 5,93 meters ahead of Micheal Frauen (5,50 m); the result achieved by the current Olympic champion in the specialty is the highest ever jumped on the Austrian ground.

“I am surprised and glad I managed to jump 5,93m” – Renaud said – “But there are things more important than the result. When I heard about Kira Grünberg’s accident, I really wanted to do something to help her”.

Furthermore, it must be noted that the athletes that competed in Cityjump in Salzburg renounced to the signing fee and the final price in order to donate all the takings to the 21 years old athlete who is in a medical clinic in Bad Haring, Tirolo.

Thanks to Renaud, who tried and failed three times to jump 6,00 meters, to all the pole vaulter in the contest and to the over 5.000 spectators, the charity event managed to raise 18.000 euros devoted to the therapy that Kira is going to undergo after the terrible accident.