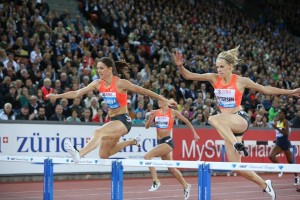 The last but one leg of Diamond League in Zurich tastes like an appointment or World revenges for who went close to the World gold medal without reaching it or for claiming one more the right to the crown.

Following chronologically the evolution of the nice Swiss evening, the one who impressed very woon was the young world champion Shawnacy Barber, the redhead polevaulter, who, not yet satisfied of his season, scored his new PB of 5.92 m and then tried to attack the wall of the 6.01 m, without success.

The places on the podium swap for the men discus, with Piotr Malachowsky giving up to Robert Urbanek who, with the measure of 65.78 m overcame his colleague and country mate by 74cm.

The weight thrower Christina Schwanitz continued her streak of victory unrestrainted; on her second throw she place a 19.91 which could have been beaten by her main opponents, as Michelle Carter and Anita Marton, but this was not the case.

A small revenge adorned by PB and NR was taken by Ivana Spanovic. The women long jump challenge had a pretty slow starting, Tianna Bartoletta had only done the first and the third jump, until Spanovic jumped 6.93m, forcing Bartoletta to try again. For a moment, it looked like it would have been a replay of the final in Beijing, but Bartoletta jumped ahead with the last jump, this time at 6,97m, but the Serbian Spanovic replied giving all of herself with and jumping 7.02m.

Great challenge, fought until the end, for the women polevault, where Yarisley Silva, Fabiana Murer e Nikoleta Kiriakopoulou took great advantage against the others until the 4.72m, jumped by Silva and Murer with Kiriakopolou who, after an error, decided to go for 4.77m, a winning choice. With this jump, the Greek athlete left Murer and Silva behind, after a failed attempt on 4.82.

The World record holder of javelin throw, Barbora Spotakova, came back winning as well managing a throw of 64.31m.

The competition was down to the last centimeter during the men long jump where Greg Rutherford this time took the lead on the second best measure. Marquis Dandy had gone ahead with 8.32m, a jump which was later even up by the World Champion who could already boast a 8.27m in the second try, which gave him the victory.

At long last, Mutaz Essa Barshim comes back winning as well, even if the results and the class of the last year seem to be quite far. 2.32m the result of the heron of the Qatar, ahead of the 2.30m made by Bohdan Bondarenko, just as the Chinese revelation Guowei Zhang.

The 3000 hurdles World Champion Ezekiel Kemboi ends up 14th, far from the important positions, with his Kenyan colleagues Paul Koech and Jairus Birech leading the attack to the arrival line, with Koech eventually winning in 8’10”24.

Shally Ann Fraser Pryce wins once more with a real champion’s starting; the Jamaican athlete did not push as in the Chinese capital but nevertheless she conquered her well deserved diamond with a 100m in 10”93, ahead of the Nigerian Blessing Okagbare.

A challenge which tastes as a revenge in the men 400m, where LaShawn Meritt did not allow Wayde Van Niekerk to immediately take the lead as in Beijing. The American runner, in fact, rushed from the start going ahead and keeping Niekerk and Kirani James. 30m far from the arrival line Van Niekerk started his come back, but it was too late, with Meritt which managed to keep the first position until the end, followed by James. Times: Merritt 44”18, James 44”28, Van Niekerk 44”35.

Nothing to do again for Genzebe Dibaba, with Almaz Ayana looking more and more as her kryptonite. On 3000m, Ayana showed her superiority from the beginning, with a race development very similar to the 5000m final. Ayana prevailed on the fellow countrywoman by 4 seconds with 8’22’34, new MR.