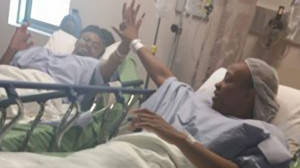 The operation which allowed the USA hurdler, Aries Merritt, to receive a new kidney (given to him by his sister) successfully took place yesterday in the Mayo Clinic in Phoenix.

According to the doctors the transplant was successfull and without further complications; it is now necessary to wait for the kidney to resume its normal operation. It will take at least six weeks during which the athlete will undergo some cycles of immunosuppressives to avoid a rejection.

Now Meritt hopes to recover fast enough to be inserted in the USA team which will take part to Rio Olympic games, in order to defend his Olympic title.

Several athletes on Twitter wrote him greetings and safe recovery wishes and we are going to join them: break a leg, Aries!

Wishing @amhurdlestar & his sister all the best on their surgeries. You inspire us, Aries!http://t.co/yCq0fPInfp pic.twitter.com/yBrWMVx8Ew