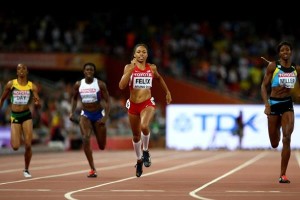 It seems a paradox: the fastest ones did not win! This is because, in the relay, a single athlete’s performance is not relevant; what matters is the team’s one and the sum of every split, in the moment when the baton leaves the hands of the carrier; but why should we not appraise these athletes who were able to produce something fantastic?

Yesterday we saw two great 4×400 races, both men and women, were the odds were not respected and surprisingly we had teams taking medals rather other ones; but who have been the fastest athletes in the two races?

An infinite standing ovation must be done to the small but atomic American girlfriend Allyson Felix. Placed in a third controversial fraction, once she got the Baton from Natasha Hastings, she started chasing the Jamaican athlete, who was already twenty meters ahead.

Felix, with his light but steady pace slowly closed the gap eventually overtaking the Jamaican athlete 30 meters far from the change zone, where she passed the baton to Francena McCorory.

Although, the last American relay racer fell into the trap of the Carribean Williams Mills who, starting behind the American, eventually speeded up towards the World gold. In all this, Allyson Felix’s effort has been clocked to 47”72, an incredible time if we think that Women World record on 400m belongs to Marita Koch in 47”60. This incredible time hints how fast the American athlete could still run on 400m.

In Beijing Felix also established her PB in 49”26, a result that, with some efforts, can lead to a time much lower than 49 seconds, maybe getting closer to the first 10 positions of the all-time world tanking, where East Germany, URSS and Cekoslovakia are ruling: the famous ’80s of the Sovietic doping. The only white fly of the group is Maria-Jose Perec, the French who was able to run in 48”25 back in 1996.

Among men, the super favorites were clearly United States, but why not to give it a shot? This is what the last runner of the Jamaican relay team, Javon Francis, must have thought when he took the baton in fifth position and tried to rush ahead. He succeded until the last 100m, where Mr.Lactic Acid, in the shape of LaShawn Merritt was waiting for him, taking advantage of the Jamaican’s tiredness and overtaking him.

On Merritt’s wake the Trinidadian runner, Cedonio and the English Rooney lined up as well. Rooney himself was able to overtake the tired Jamaican runner, just on the arrival line. In the end, by some thousandth of seconds, Great Britain won the bronze and Jamaica the wooden medal, but Javon Francis will be able to boast he was the fastes in the 4×400 with a split of 43”52.