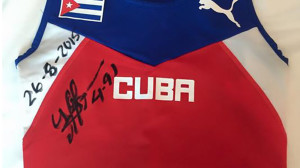 The greatest athletes in the world are showing to be supportive towards the Austrian athlete Kira Grünberg who became paraplegic after a nasty accident in the training session.

The starting note was given by the world record holder Renaud Lavillenie who, in two days, will join a jumpic competition in order to raise funds for the girl, while some days ago two more athletes fought to gift her of a surprise: the new pole-vault World champion Yarisley Silva and the discus  thrower Robert Harting.

Yarisley Silva, after having won the World title with a 4.90m jump decided to put the top she competed with in Beijing up for auction, and the money will go to Kira’s family. In this way, she hopes to be able to contribute to the economic costs they will have to face.

HERE IS THE LINK TO THE AUCTION

Robert Harting showed in the rehab center at Bad Häring where Kira is, few days after the girl’s 22nd birthday and he gave her a t-shirt of the World Championships with a dedication. “Kira is so strong and full of courage, she is incredible. I have great respect for her, she is really a great woman and a true fighter.“ these were the words of the Olympic Champion after the meeting he had been planning for a while; he hopes he was able to raise her spirits a bit and he would like to meet her again.

Moreover, we would like to remind you that everyone can make a donation HERE.