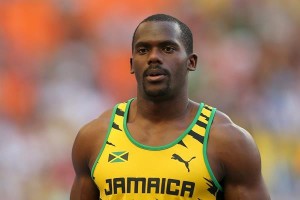 The Jamaican golden era, the green and yellow colours era, the Usain Bolt’s record era started on 2008. Since then, all the eyes have been always pointed at the current World champion, while moving from times to times to the ex record holder Asafa Powell and to the young roaring Yohan Blake. All these great athletes made the history of the sprint achieving records over records and creating a great 4×100 relay team.

Nevertheless, counting all the medals, starting from Beijing 2008, an athlete was always present at each Jamaican victory on speed relays: Nesta Carter.

Born in ’85, with a 100m record of 9″78, Nesta Carter took part in all the important Jamaican relay races for each competition, but Berlin 2009, where Steve Mullings replaced him, otherwise they would have a well hailed change, since Chinese Olympic Games, and that would have reached its peak on London 2012: Michael Frater passes the baton to Nesta Carter or viceversa.

In fact, Frater and Carter have always competed as supporting riders in 4×100 race, when the real spotlights were on third and fourth leg with Bolt and Powell or Blake.

However, even if they have almost only attended relay races, the two Jamaican runners can boast of three world records, two olympic golden medals and a plenty of world championships gold medals in their palmares, since when Bolt made his appearance: three for Carter (Daegu, Moscow, Beijing) and two for Frater (Berlin, Daegu).

Nesta Carter should not have taken part to 2015 World Championships (while Frater has not been in since 2012), but the fate knocked at his door when Kemar Bailey Cole, the regular athlete, could not leave to Beijing. At the beginning, IAAF was against Carter’s partecipation in China but, in the end, he managed to leave for his umpteenth world golden medal of his brilliant “relay man” career.

Maybe, this is the strength of Jamaica compared to USA, that run into numerous mistakes during the changes in the last years. The Jamaican relay team, where the athletes know each other really well, manages to find the familiarity that is probably missing in the USA team. Who knows if the career of this highlander will include Rio Games as well, and if this will happen along with a gold medal, it would really be a statistically particular event.

Below, the interview to the four Jamaica relay racers after the gold medal conquered.