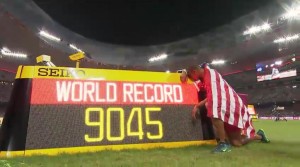 In this stellar edition of the World Championships the only thing missing was a World Record. In the last but one day of the competition we had it served as well!

The starting was calm with a light progression, along with the Algerin Bourrada, to eventually speed up on the last lap and end in 4’17”52, enough to score 9045 points, 6 more than the old World Record.

Routine hug with his wife, the World vice-champion Brianne Thiesen, for the American who once more rises on the top of the world with his second world title.