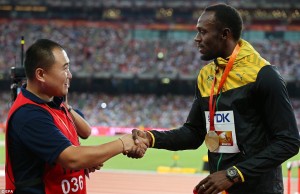 It has surely been an unwanted move by the Chinese cameraman who, after the 200m final, had run over Usain Bolt with his segway while the latter was completing his honor lap. The Jamaican, after some pain grimaces for the impact, had reacted with a smile and he had even helped him to stand up.

It looked like the case was over but Song Tao, clearly sorry for what happened, showed up after the award ceremony to give a gift to Bolt: a red bracelet which the sprinter seemed to like. Then, a pat on the shoulders, a handshake and the pardon of the good Bolt put the word “end” to this little accident.