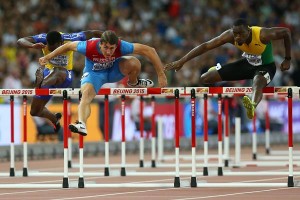 The air inside Bird’s Nest keeps staying sparkling, with the two finals of the hurdles and the one of woman long jump, which reached a level which had not been touched in quite a long time.

Exceptional display of skills by all the jumpers, with Ivana Spanovic starting the dances; after the personal record of 6,98 achieved during qualifications she performed a roaring 7,01 which definitely inspired all the other competitors, especially Shara Proctor who did not stay to watch and jumped 7,07. The gold medal seemed to be a fight between Croatia and England, when the favorite, Tianna Bartoletta, who stayed a bit aside for the all competition, on the last jump available takes the right measures and jumpes at 7.14, beyond Proctor, leaving no hope to the two rivals who, obstinately , tried their best on the last jump, without success.

Someone who never betrays expectations in the important competitions is the tall Russian hurdler Sergey Shubenkov, always ready when he needs to.

This 110Hs final showed Shubenkov’s great will, who from the very first meters kept a fast pace, taking the lead in the middle of the race handling the pressure coming from Hansle Parchment and Aries Merritt, arriving well on the last hurdle and getting out of it fastly enough to reach the arrival line in 12”98, Russian record. Behind his shoulders there is the great Jamaican exploit, Parchment, at 13”03 and the bronze for the enthusiast Meritt who did 13”04, a time which hopefully will make him quite enough for the imminent kidney transplant he will have to go through.

In women 100 Hs, Brianna Rollins definitely messed up the starting, knocking the first barrier and leaving the others athletes go. Porter seemed to have the race in her hands but, at the exit of the last hurdle Danielle Williams, Cindy Roleder and Alina Talai made their mighty comeback, leaving only the wooden medal to her..