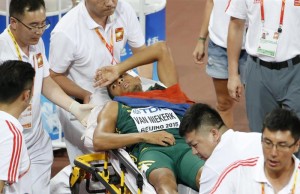 400m event is known as the death lap and the athletes practicing this specialty know pretty well the reason of this denomination: it is exhausting.

The South African Wayde Van Niekerk, new World Champion of 400m, as soon as he won the race, collapsed on the ground and he left the track on a stretcher toward to the hospital.

Luckily, it was only a great fatigue for him, as IAAF stated a few later. During the final, the athlete managed to better himself of one second ending with 43″48, new African record and the best worldwide performance. SEE THE VIDEO

Now he left the hospital; let’s hope he will not exaggerate celebrating as the hammer thrower Pawel Fajdek!