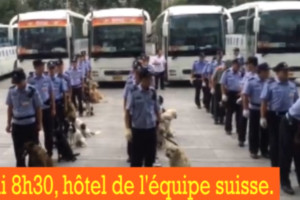 The video broadcast today, in which a squad of around fifty policemen lined up outside an hotel is clearly visible, definitely looks like a scene from a police movie.

Although, that was not a random hotel: the building you see hosts the national teams of Switzerland, Germany, France, Great Britain, Portugal, Czech Republic, Ecuador and Colombia for the World Championships which will be held in a few days in Bejing.

The recordings have been shot yesterday, Tuesday the 18th of August, at 8.30, when dozens of policemen evacuated the hotel and broke inside with anti-drug dogs; it is not yet clear if they were looking specifically for something, but the official motivation was a “security control” to perform in the building where the athletes are being hosted.

In the final part of the video three Swiss athletes can be seen; among them, Marisa Lavanchy, 25 years old sprinter, who looks surprised and narrates how the police’s break-in has been lived by the athletes.

Here is the video: