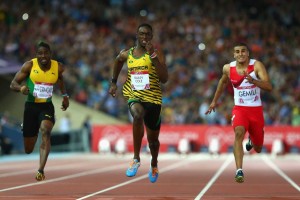 The list of athlets giving up on Bejing’s World Championships keeps getting longer and longer and this time the absentee is a Jamaican: Kemar Bailey-Cole, sprinter who, back in 2012, won the gold medal at the Olympic Games of London in the 4×100 along with the squad captained by Usain Bolt.

In truth, the sprinter had already been summoned and he had confirmed his presence but he took a step back due to an injury of yet unspecified nature.

Therefore, no attendance to the Championships for the 23 years old young athlete who , as a rookie, attended the World Championships of his category in Bressanone in 100m and 200m contest and who, in addition to the Olympic gold medal in London, can be proud to have in his palmares the first place in the speed relay race in World Championships in Moscow 2013, in World Relays in Nassau 2014 and in the Commonwealth Games in Glasgow last year.

During the last competition, moreover, the Jamaican runner won the gold medal for the 100m contest as well with a time of  10″00 while, during the World Relays occurred this year, he had to “make do”, as the national team, with a silver medal behind of the USA.