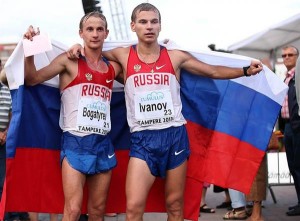 Yesterday we discovered three racewalkers trained by the highly contested Viktor Chegin, coach of a huge number of athletes banned for doping in the last years, joined the Russian team for Beijing’s World Championships.

Chegin has the bad record of more than 20 athletes banned for doping, with a lot of Olympic and Worlds medals among them. Some months ago he has been fired by Rusathletics as chief of the racewalking national team.

Their names appeared in the provisional entry list published yesterday, after the Rusathletics President declared that there won’t be racewalkers in the team and after one racewalker, not trained by Chegin, appeared in the official team.

This decision will surely raise strong disputes; some days ago some athletes promoted on Twitter a campaign against Chegin and the anti-Chegin racewalker Evan Dunfee, retwitted this picture containing a clear message.

Evan Dunfee himself, after the discovery the presence of the three racewalkers in the list, ironcally tweeted that now it’s really necessary to wear that t-shirts in Beijing.

So Ivanov, Krivov and Vasilyeva ar on the provisional start lists for #Beijing2015. Maybe we'll need the shirts after all @ChrisErickson00 !