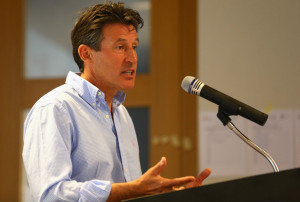 From Tuesday, the 18th of August, to Thursday, the 20th of the same month, the 50th IAAF Congress will take place in Beijing. On the occasion, the new president, replacement of Lamine Diack, will be elected: the fight for the presidency of International Athletic Federation will be between Lord Sebastian Coe and the pole vault Tzar, Sergey Bubka.

Although this, right now, the ‘duel’ doesn’t seem quite equal because of the presence of a favorite candidate. He is the president of the organizer committee for London 2012, twelve times worldwide record holder of middle-distance running: Lord Sebastian Newbold Coe, or known as baron Coe of Ranmore.

In fact, the ex British middle-distance runner is currently openly sustained by 36 countries, against the only five Bubka supporters, who have already declared they will back him up in order to reach the vertex of the Federation located in Monaco. Antigua and Barbuda, Bahamas, Barbados, Bermuda, British Virgin Islands, Cayman Islands, Grenada, Puerto Rico, Saint Vincent and Grenadine, Trinidad and Tobago, Turks and Caicos and US Virgin Islands, Canada and Jamaica are some of the States among the supporting ones, not considering the copious number of European countries who had already expressed their back-up on Sebastian Coe. Lately, Greece joined the group as well while regarding the African Continent, Ghana became the first nation which promised to vote for the British candidate.

Perù, Paraguay, Singapore and Thailand, instead, ensured their support to Bubka but, despite this, he seems to be more disadvantaged than his opponent who should be voted from USA as well, even if the country stated they will not let publicly know the candidate they will support in the Chinese capital.

Coe, who reached Beijing today, said: “I’m extremely honored as well as encouraged since so many national federations have expressed their backing on my candidacy before the elections of the next week. It counts a lot for me to know I have their support and the public support, in this moment. I’m looking forward to meeting many other federations when they will arrive in Beijing before the Congress.”

Puerto Rico and Greece’s decisions to support Coe arrive, though, as a real surprise since they shared their own opinions with Sergey Bubka: “I really feel we reached a turning point and a fundamental milestone for our beloved sport”,  Kostas Panagopoulos, the president of SEGAS (track and field Greek federation), wrote in a letter to Coe stating his full support.