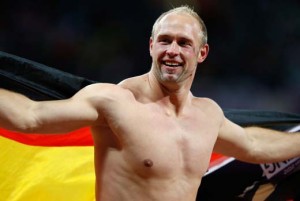 The list of international value athletes who will be missing at the World Championships is growing really fast. Some days ago the discus throw world champion in charge Robert Harting (winner in Berlin 2009 and Daegu 2011 too) announced not to be sure of using his Wild Card to compete in the Beijing’s Bird Nest.

Now the news is official: the discus thrower will not land in China, renouncing to defend the title.

The german athlete, in the last days under the media attention for being the promoter of a video against the lack of transparency of IAAF in matter of doping and against dirty athletes themselves, just recovered from a knee injury came up last september.

The 30 years old doesn’t want to risk in sight of Rio 2016: “Unfortunately taking part to the championships is too risky for me. If the ligament tears I could not prepare next year olympic games.”.

So without Beijing, the focus now is all on Rio de Janeiro, where he’ll try to double the victory of London 2012.