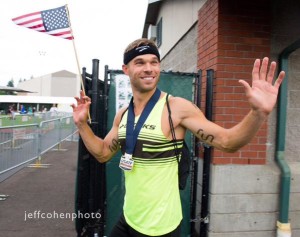 Nick Symmonds is a person who hardly reserves his ideas, in fact, he is continuing his little personal battle against USATF and Nike.

The USATF has forced athletes who will leave for Beijing to sign a contract in which is required to use Nike material even outside the races. Nick Symmonds, left by the American brand, has opted for Brooks and now also for tattoos that show the logo of Run Gum, a manufacturer of sports equipment and supplements which Symmond is the co-founder.

Symmonds said that signing this agreement he feels his rights as an athlete violated. The sign of the contract seems a necessary factor to go on to compete at the upcoming World Championships.

The Federation did not wait to reply, declaring that if the runner will not sign the contract then he will be removed from the team, to leave space for the “reserve”: Clayton Murphy, the winner of the PanAm Games.

Flotrack went to interview Nick Symmonds, who seems determined not to sign the hated contract, showing great consistency with his ideas, and explained how he has all the requirements to fly in China except fot the national sponsor.

Here’s the video with an interview with Nick Symmonds offered by Flotrack.

Also on Twitter fighting has broken out, and it seems that the world of the web is on the side of the USA’s distance runner.

Great interview @NickSymmonds It's easy for those who are "bought & paid for" to criticize your efforts! You've got my support!

Thank you @NickSymmonds!! Standing up 4 what is right is not always the popular thing; future athletes pay attention::http://t.co/qKevFlGiHr