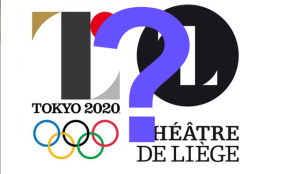 In 2020 the Olympic Games will cross again the doors of the deep East, as happened in 1964, when the capital of Japan picked up the Olympic flag after Rome.

After the assignment, Tokyo and the entire Japan are working to make their Olympic experience memorable.

Along with the shape of the Olympic village and stadium, the image is important, and the designer Kenjiro Sano has worked hard to create the official logo of the event.

In Belgium, another designer, when he saw the work of Japanese, went on a rampage. The Belgian designer Olivier Debie has clearly stated that the logo of Sano that was too similar to his design for the Theatre of Liege.
The lawyers of the designer sent a letter to Japan.

Kenjiro Sano immediately denied everything. Sano considers the logo as his masterpiece and he would never allowed to plagiarize. As you can see, the Japanese project revolves around the letter “T”, the initial of the host city, with a large red circle of the rising sun. However, the similarity with the Belgian alter ego is really impressive, although never officially registered.

The media whisper that Debie could ask Tokyo to withdraw or change the image, because even if not registered, through two years of use, the logo of the Theater of Liège would have been recognized by the international authorities. The officials responsible for the organization of the Games have received a letter of Belgian lawyers, but they declined to reveal its contents. They said only that they will work with the Japanese Olympic Committee and the International for an answer.

Hidetoshi Maki,  made detailed checks worldwide before revealing the logo, clarifying everything with a clear and simple answer: “Their logo is not a trademark, so there is absolutely no problem”.

Japanese Twitter pointing out the similarity of the Tokyo 2020 logo to existing designs. Sincerest flattery? pic.twitter.com/hpRhHYLVSX