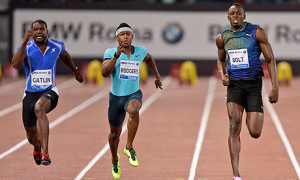 He won a gold and a silver medal at the Olympic Games, now the ex sprinter Darren Campbell sentences his profetic ad philosophic forecast.

Accordig to Campbell, Beijing 2015 will be a defiance, not only for the title of 100m and 200m, but also between clean Sport and doping’s doubts.

“ I support Usain Bolt, but  in a crazy kind of way I want to see Gatlin beat Bolt. In this way, finally the Sport  will have to deal with it ” told Darren Campbell to BBC Radio 5 Live. This is the sedate idea of Campbell, that hide a thin criticism: ” Good work Sport, a man twice convicted of doping has won a world title.”

” The Sport will be finally in the spotlight” went on to say Campbell. “Is not a problem about remove Gatlin, but how athletics want to see its future”.

Usain Bolt vs Justin Gatlin, “Good vs Evil”, “Sport vs Doping” , there are many proportions for this epic battle. One thing is certan: Usain bolt will toil to defeat Gatlin, because the good season for the Jam sprinter started in London not long ago, meanwhile Gatlin started to run fast from the beginning of 2015.

Regarding the Doping question, only time will judge, because the new scandal is flailing the weak reputation of Athletics world and destroying the ideals of many young athletes.