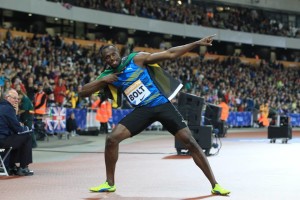 During the 11th phase of Diamond League in London, the most awaited race was, without any doubts, the 100 meters, because of the great return of Usain Bolt. After a period of absence from the tracks, while Justin Gatlin was showing his supremacy wherevere he was, the Jamaican athlete got back on track and he is still faster than anyone else.

The heat ended with a time widely lower than 10 seconds: the starting was not exciting and so the first meters but in the peak of the race he managed to take off, sliding on the finish line with 9″87 (-1,2), considerably slowing down.

He made the same time during the final race, where he came up trumps against the American Michael Rodgers. The reaction time was pretty low at the starting blocks and it showed Usain Bolt being still far from his best condition; despite this, he warned us and his direct opponents that he is still there, that he came back and he has no intentions to leave  the scepter of fastest man in the world in Bejing.

During the Londoner evening, a great surprise for the Italian team occurred. Marco Fassinotti and Gianmarco Tamberi made two best results against eminent athletes, Mutaz Essa Barshim in primis. The athlete from Piedmont, member of the aeronautics, won with 2,31 on a wet springboard and with hard weather conditions. Tamber crossed 2,28 as Barshim, but with a mistake less at the previous amount. Other well-known athletes in the field ended behind them as Erik Kynard and Robbie Grabarz.

Considerable performances tower from the other races taken place during the first day of the meeting: Jasmin Stowers, winner of the 100hs with 12″47, Zuzana Hejnova prevails the 400 hs race with 53″99 while the best 2015 worldwide performance in 300m was made by Mo Farah (7’34″66). During the 400m race, Natasha Hastings stands out with 50″24 against Francena McCorory and her 50″67. The 200m race, instead, saw the triumph of Zharnel Hughes with 20″05.

The 110hs race was rather intense, the first one on the finish line was Jason Richardson with 13″19, followed by Pascal Martinot Lagarde with 13″22. Aries Merritt, with 13”32, completed the race further behind.

The other competitions were not so much exciting. The first place in the discus was taken by the Belgian Philip Milanov (65,14) since Jason Morgan e Piotr Malachowski were quite below par, the 1500 meters had as winner Laura Weightman (4’06”09) while the first position in the triple jump was Olga Rypakova’s with 14”33, since all the best opponents were absents.