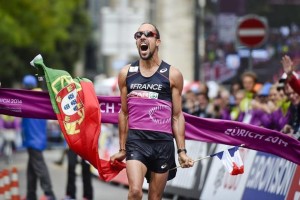 While the cast of athletes who will take place to the World Championships in the Bird’s Nest of Bejing, from 22nd to 30th of August, is getting more and more complete, some surprises subvert the starting lists and the pace of some of the races.

After the announcement of the almost certain absence of the russian racewalkers, a move the federation wants to give signs of transparency with, after the numerous cases of doping which interested the specialty, another important athlete has been forced to rise white flag: Yohann Diniz. He surely isn’t a racewalker like the others: in his palamres there are three European Champion titles (won in a row) and a Silver medal at World Championships and he currently is the World record-holder of 50km on street (3h32’33”) and on track (3h335’27”2).

The reason to give up to Bejing’s Championships is a problem to a ligament of the groin, a problem which prevents him from a proper preparation to the Championships. Who knows then, what kind of race we will witness to without the French star and the Russians!

For what regards the middle-distance, convocations for Bejing have just been issued from the Etiopian federation, with some unexpected moves. Among these, there surely is the absence of Genzebe Dibaba in the 1500 meters, the distance on which a few days ago, in Monaco, she got the World record with 3’50”07. Apparently, the Etiopian athlete will only compete on 5000m.

Going on longer distances and, particularly, to what regards marathon, it is necessary to underline another relevant absence. In 42,195 km women, in fact, Valeria Straneo will not be on the starting line. The athlete, who won the Silver medal at the last World Championships in Moscow, in 2013 will not be able to join the meeting in the Chinese capital due to a plantar fasciitis which didn’t allow her to train properly. We wish Valeria a fast recovery, so that she can come back as soon as possible to rejoice Italian supporters!

In the picture: Yohan Diniz (AFP)