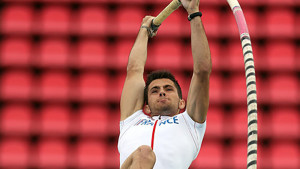 We will not be able to see both Lavillenie brothers competing to the next World Championships. Valentin, in fact, got injured during a training and will not manage to side Renaud in Bejing.

The youngest of the two, who competes for Clermont Athlétisme Auvergne was jumping onto the springboard on which he regularly trains when his pole broke causing him to fall to the ground, thus breaking left wrist.

It is not the first time we witness to the wreckage of the pole used by jumpers: it happened to Steve Lewis as well, although he was left unharmed by the accident.

The French athlete, who won a bronze medal at European Championships Under 23, will then be forced to rest for tree months, thus not competing, unlike his recordman brother, to the World Championships, which will take place in the Chinese capital in August.