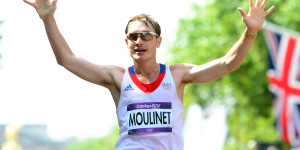 The French racewalker Bertrand Moulinet has been suspended for 4 years from the French Federation of Athletics because of the positive result to the anti-doping test for the FG-4592 drug.

This drug is a small molecule which is assumed via mouth to stimulate the production of EPO.

Moulinet is an athlete who has competed at very high levels in his specialty, placing himself among the first 10 classified at London Olympic Games. The 23rd of April, policemen from the Central Office for the Fight against Violations against Environment and Public Health visited Moulinet’s house for some controls; all the materials gathered was seized and underwent scientific analysis (the investigation is still running on).

Through facebook the French athlete explained the motivations which led him to be suspended by the French Federation:

“[…] because of a substance forbidden by the world antidoping codex such as FG4592, OCLASESP came to my place this morning (Tuesday) to lead an investigation”.

Moulinet had managed to further improve his personal record in the 20km of March at Arles, on the 8th of March, bringing it to 1h19’18”, only two minutes away from the European Champion Yohann Diniz.