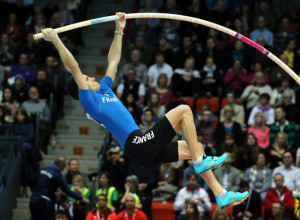 In the past weekend, the French athletes joined the fray for the Elite French Championships hunting for the title of national champion. Villenueve D’Ascq hosted many of the probable protagonists of the next Bejing World championships, with some interesting results.

After the recent defeats in Diamond League, Renaud Lavillenie comes back to victory, collecting his fifth title in a row. 5.70 the results with which he joined the competition, followed by the remarkable jump of 5.85. Then the attempts with the crossbar set at 6 meters, none of them successful. Behind him Kevin Menaldo, much improved in the past two seasons and second with 5.75.

Hurdles, the French speciality, was not disappointing as well. From the 110hs men’s final three star names emerged for the French team’s expedition to Bejing. The title goes to Darien Garfield in 13”17, who won on Pascal Martinot-Lagarde (13”27) and Dimitri Boscou (13”38, ma 13”23 in the heat). There is no space on the podium and, with all the odds, in the selection for the Bejing, for the ex-World Champion, Ladij Doucoure, fifth in 13”79. Among women Cindy Billaud dominated with 12”83 in the heat and 12”89 in the final.

Remarkable times from the other velocity races, with the duel between Jimmy Vicaut and Christophe Lemaitre resulting in a par. Vicaut wins 100m with one more time blow ”10 (9”92) while Lemaitre scores his seasonal record with 10”07. Positions are inverted on the 200m: 20”28 against 20”42.

Pierre-Ambroise Bosse doesn’t disappoint in his specialty, 800m, leaving everyone behind him with a time of 1’46”69.

The European champion of triple jump, Benjamin Compaore, resulted definitely below expectations, ending up wight with 15,37, partially justified by a pain to the knee tendon which got him during the warming up.